Village of Park Forest issued the following announcement on Dec. 6.

Fiorenzo was officially recognized as the 2019 Sam Montella Park Forest Business Person of the Year Monday night at Village Hall.

“Ever since the first business person of the year award, someone has nominated Janet Fiorenzo. Every single year,” Perkins said.

Fiorenzo’s popularity in the community stems from the quality of her service, her longstanding relationships in the neighborhood, and for her many acts of kindness.

“Through this recent nomination process, EDAG discovered that Janet donates her dry cleaning services to a variety of causes, programs and agencies for absolutely no charge,” Perkins said.

For her part, Fiorenzo said her business would not be possible without the help and support of others.

“Standing up here, I can’t take all of the credit myself. You have to have a support staff,” Fiorenzo said.

“I have to thank the Village of Park Forest. You wouldn’t last 22 years if this wasn’t a business friendly place. This is the best place I’ve ever rented.”

Tower Cleaners first opened its doors in the mid-90s in the former Tower Plaza, located in the south end of the village, before relocating in 2007 to its current location at 230 Forest Boulevard in downtown Park Forest. 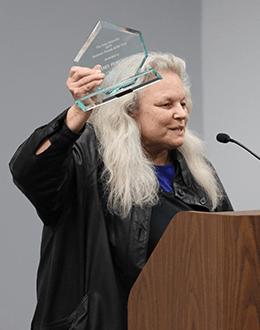