Village of Park Forest issued the following announcement on Feb. 17.

Metra today unveiled proposed revisions to its Metra Electric Line schedule and has asked its riders for feedback in an online survey. The new schedule includes changes made necessary by the implementation of the new Positive Train Control (PTC) safety system.

The proposed changes will mostly affect trains arriving or departing from Millennium Station during rush hour periods from 7 a.m. to 9 a.m. and from 4 p.m. to 6 p.m. weekdays. As part of the schedule adjustments, Metra is proposing other changes, including new stopping patterns.

Metra is seeking customer feedback on the proposed new schedule, which can be viewed here and is being distributed on Metra Electric trains and at Millennium and Van Buren Street stations. Please review the new schedule and provide feedback via an online survey here until March 1. Metra may revise the proposal based on feedback, with a goal of implementing the new schedule later in the spring.

Some of the major changes include:

• Dividing the suburban part of rush hour schedules into trains serving two groups of stations instead of the current three groups. Many trains will make more stops and train runs will take slightly longer. The size of trains will be adjusted to account for additional customers.

• The addition of a daily midday outbound suburban express train

This video explains the changes and the reason for them:

The proposed new schedule is here and the survey is here.

PTC is a federally mandated safety system that will automatically stop a train if the engineer fails to obey a signal or exceeds the speed limit. The system integrates GPS, trackside sensors and communications units, onboard computers and Metra’s centralized train dispatching system. Together, these components track trains and monitor the crew’s compliance with speed restrictions and signals. Although it can’t prevent all accidents, PTC increases safety by preventing train-to-train collisions, unauthorized entry by trains into work zones and derailments due to speeding or moving through misaligned track switches.

Under PTC, the crew of a train must initialize the system before each individual run. This includes entering information about the size and makeup of the train (because its weight affects its stopping distance) and any other details about conditions along the route (such as work zones or speed restrictions) that could affect the safe operation of the train. The initialization process takes about six minutes.

To handle as many passengers as it does in every morning rush period, Metra must quickly turn trains around at Millennium Station and send them back out to make more inbound trips. The same goes for the evening rush period, as trains complete their trips to the suburbs and turn back to pick up more customers downtown. Metra calls this process “flipping” a train, and it will take longer because of PTC.

To flip a train, the engineer must move from one end of the train to the other, and the crew must clear the train, perform a brake test and conduct a job briefing. With the added task of initializing the PTC system, these “flips” are expected to take more than 10 minutes. On the current Metra Electric schedule, there are 51 trains scheduled to flip in less than 10 minutes, including 23 scheduled to flip in less than 6 minutes. The need to initialize PTC means it will not be possible to operate the same number of trains during rush hour, and so a new schedule is needed.

Metra has tried to create a schedule that minimizes the impact of the reduction of trains, but it is not possible to eliminate that impact. We understand these changes may be an inconvenience to customers, but we have taken and will continue to take steps to limit the inconvenience as much as possible. And customers should know that with PTC operational, their already safe trains will be even safer. 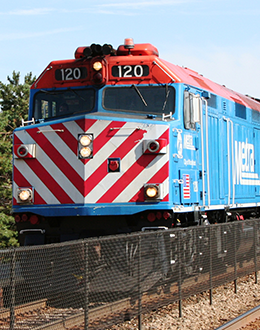